Peyton Bogard was winding down from one of the premier recruiting showcases for his sport, Nike Blue Chip Lacrosse Camp. He and his dad still had five or six hours to kill before their flight home, so the two decided to visit the University of Maryland, a school Peyton was considering. They were exploring campus when Peyton’s phone buzzed. A text message read: Coach Conry, Defensive Coordinator at Maryland, would like you to call him in 30 minutes.

Peyton’s dad was as surprised as he was by the unexpected contact. The pair were sat in a rented minivan parked in front of the dorms. They looked at each other.

Rewind two years. It was in 7th grade that Peyton first committed to the pursuit of his dream to play college lacrosse. He and his friends were watching the Duke National Championship game where CJ Costabile scored the overtime winning goal. Peyton realized he wanted that to be him.

“I want to play D1 Lacrosse,” said Peyton. It was the first time he voiced this goal.

Peyton’s friend had a different perspective.

“There’s just no way you’re ever gonna do that,” he said.

Yet, as soon as Peyton said it out loud, something clicked. Three years of practicing against an old wall after school had built towards this moment.

Peyton’s friend had a point. If he wanted to make a college team, he needed to overcome two obstacles.

A Snag in the Plan

Peyton was slow. But that was within his control. He would work harder. Peyton resolved to work as hard as necessary to become more athletic. He would train longer, eat smarter, work harder – to whatever extent necessary to catch and pass his competition. Great athletes aren’t born, they’re made. Greatness was a choice.

However, Peyton’s geography posed the greater problem. He knew he could change his body; he didn’t know if college coaches would notice.

Peyton lived in Atlanta, a non-hotbed if ever there was one. Coaches didn’t come to The Lovett School to watch lacrosse.

Rather than view his circumstances as a disadvantage, Peyton chose to perceive opportunity. He would turn his weakness into a strength.

Coaches wouldn’t see him play live. They wouldn’t sit on the sidelines during a dominant performance. There was no chance for Peyton to play his game and happen to get discovered.

But it also meant that college coaches never witnessed a subpar performance, or a game Peyton played on an injured ankle. Geography masked any weakness. To compensate for coaches not coming to his games, Peyton turned to the next best thing: video. Or was it the best thing?

Video afforded Peyton control over what plays coaches did see. He was no longer a passenger in the recruiting process. Peyton took the driver’s seat.

“Sup dawg, is this Peyton?”

The nerves dispersed. This was going to go even better than Peyton had hoped.

But Peyton never hoped for success. He planned for it.

This call with Coach Conry may have been Peyton’s first phone conversation with him, but it was not the first time they communicated. It was the culmination of repeated outreach on Peyton’s end. Peyton had been in touch with Coach Conry after first finding him through Advanced School Search. He included a highlight reel with his messages. He thought carefully about what to say, taking care to exude humility, respect, and determination. Peyton made sure to message Coach Conry to say that he would be playing in Nike Blue Chip. They communicated on SportsRecruits throughout the tournament.

Keeping in touch was a concerted effort. Peyton logged in to SportsRecruits every week to contact Coach Conry and coaches like him. When Peyton got a notification that a coach viewed his video, he followed up immediately. Peyton used his outreach strategy to build rapport. And it worked. When at last Coach Conry came to watch him, he had already made a great impression. Peyton committed and signed to play lacrosse at the University of Maryland, Class of 2021.

Peyton’s recruiting strategy is not limited to athletes located in a non-hotbed area. It can be applied to any athlete’s recruiting journey. The only prerequisite is that the athlete must want to take the wheel. Peyton’s strategy can be broken down into two key parts: 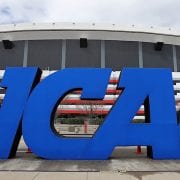